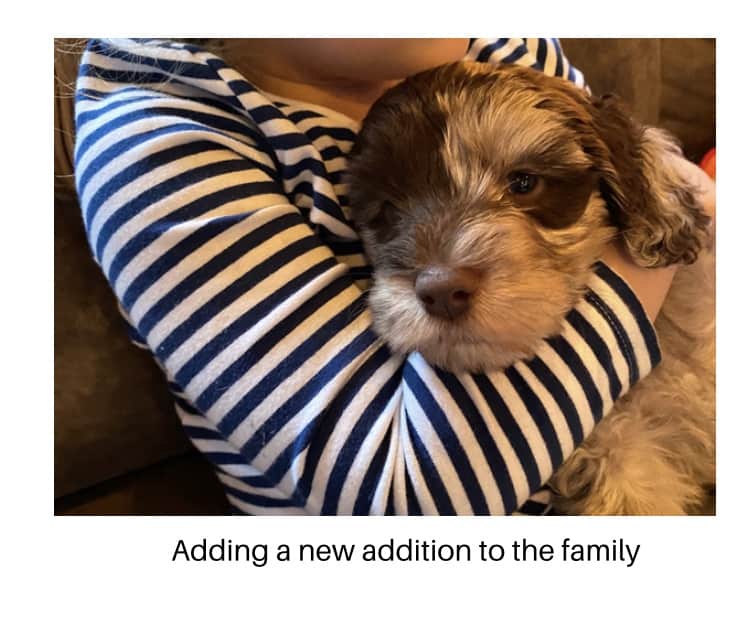 As I’m writing this I feel so sick and nervous to share this with you all. Mainly for the fear of being judged. We are adding a new addition to the family a little Puppy. Now if you have read my blog for a while you will know that 2 years ago we made the hard decision to rehome our dog. A mixture of different things meant we were unable to give her what she needed. We made the right decision for her and rehomed her.

Now I know what some of you will be thinking what makes it different this time. Believe me, it wasn’t a rash decision we made overnight and we felt awful about even thinking about getting a puppy. Then someone said to Jordan do you think your old dog is sitting with their new owner wondering where you are or feeling bad because she doesn’t live with you anymore? No! no she isn’t. You did what was right for your family and for your dog at the time.

When we rehomed Kya Jordan vowed never to have another dog. Which was a decision I was happy to go along with. The pain of having to admit you cannot give a dog all that they need is horrible. I still think about her all the time. Look back at pictures of her and think about all the fun times we had.

Our lives over the last 2 years things have completely changed. We have moved into a bigger house with a good-sized garden. The children actually enjoy being at home now as they have the space to explore and play. We have become more of an outdoorsy family and enjoy going on walks. So a dog would fit perfectly into our life.

It all came about because we went to visit a litter of puppies that my mom and dad were having a puppy from. Just so we could see how the kids would be with the puppy as my mom has Alby every week for me so I can go to work. So she wanted to make sure he was fine around the puppy before they committed to having her.

The kids just melted around them. They were so calm and sat with them and were so gentle. Then all they would talk about was one of the puppies. Not even the one my mom and dad was getting but a little boy puppy that was called pirate. Jordan then instigated a conversation about wouldn’t it be nice for the kids to have a dog. Then it just evolved from there. I knew that Jordan was seriously thinking about it as he would never have brought it up into conversation if he wasn’t.

So we went away and had a serious chat about it. Looked at the pros and cons and took everything into consideration. The guilt of already rehoming a day was the only con we could think of. After speaking to friends about it and the consensus from them being that we shouldn’t beat ourselves up for rehoming Kya. Or for that to stop us from getting a dog again. We made the decision to say yes to the puppy.

We didn’t tell the kids straight away as we wanted to make sure we had everything in place before we told them.

Obviously, they were overjoyed and excited that they were going to have a puppy. That it was going to be there’s to keep forever. I’m looking forward to our family experiencing new things with our new little puppy Luca. Were even thinking next year to go on a little staycation with the Luca and the kids which just makes me feel so warm and fuzzy inside.

I know people are going to judge us and it’s something I felt I had to explain my reasoning for even though I know I shouldn’t have to. I’m ready and waiting for some negative comments but there is nothing I can really do about that.

The 13th November cannot come quick enough. Were so ready to welcome Luca into our family. If there is one good thing to come from 2020 it’s this.

Eczema treatment during the summer months