One of the things I worried about when I was pregnant was how Ava was going to be . I was so worried she would feel pushed out . Especially as she is still young I worried she wouldn’t understand what was happening. I worried that she would resent Alby when he was born. That we would have to deal with sibling jealousy. 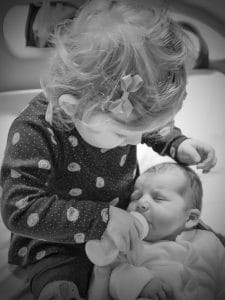 Then Alby came along and my worries just melted away . She was so happy to have a little brother and didn’t batter an eye lid when I was seeing to him . She dealt with it so well up until recently. I’m now having to deal with sibling jealousy.

It has coincided with Alby starting to be more mobile and wanting more attention.His also becoming more interested in the people around him . Ava kind of deals with this at home but when we’re at my parents house she doesn’t like it . Especially if granddad is playing with Alby. She will do anything and everything to get granddad’s attention. Even if it is pretending to be upset. Or she pretends she needs a wee as we all spring into action as she is only just potty trained she needs some help still.

I have also found generally behaviour has changed . Not all the time but snippets through the day she can be a little monkey . She has the attitude of a teenager already. So god help us when she is a teenager.

She has started shouting at us when she’s not getting her own way. The evil looks as well honestly if looks could kill I wouldn’t be writing this post. Then there’s the hands on the hips. This I will say is learnt behaviour as my mom does this a lot without even realising it. Ava has picked up on this. She has also taken to waggling her finger at me . I may just be sitting on the sofa and she will come over to me waggle her finger and tell me to say sorry. What I’m sorry for I’m not really sure.

A lot of the time it is down to being over tired . She’s trying desperately not to have a nap. I have found this negatively impacts on her behaviour. It’s still no excuse though and she does need to learn that sometimes her behaviour isn’t acceptable.

She also thinks she is really sly and clever and will do things to upset Alby. Like taking his dummy off him when his chilling or waking him from his sleep. The poor kid very rarely has a good nap as his usually woken up by Ava.

How I’m dealing with her behaviour

From very young I have made she Ava understands when she does things that aren’t kind or right. By talking to her about it and asking her to say sorry . Which she does do but now she tells everyone to say sorry even if they haven’t done anything. Maybe I have over used the word sorry and it doesnt mean anything anymore !  This is the same for sharing . She will tell everyone to share but isn’t the biggest fan of sharing herself at times.

When her behaviour is getting too much I do the whole count to 5 . Normally by the time I get to three she snaps out of it and is fine. A few times recently though this hasn’t worked and I have had to take to giving her time out. Like the other day when she squirted juice all up my moms wall . Because I was doing something and my dad had Alby so she couldn’t get the attention she wanted . So I guess she figured any attention was something even if it was negative attention.

The other day she had a particularly bad day so in the end I took her bunny and dummy off her. Now these are her loved possessions so I knew she would take in what I was saying to her. I did however feel about it.

I do have to keep reminding myself she is still only young . That this is normal behaviour and she’s not the only toddler to be acting like this. I’m hoping that when she is back at nursery and spends more time away from us . That this behaviour will lesson and we will have more of he happy well-behaved Ava. 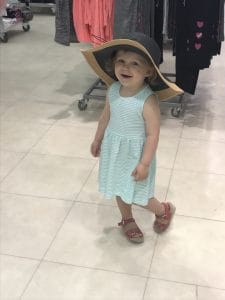 As most of the time she is a pleasure to have. She really cracks me up. Having the kids so close together has been hard. I’m ; 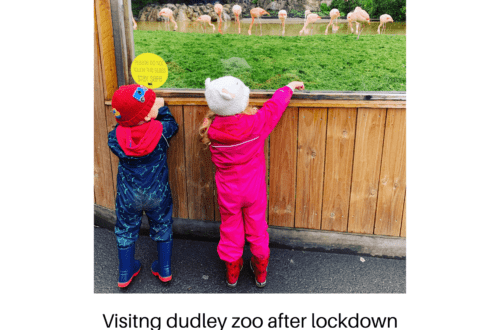