Ava is a good talker but I would say she has been a little bit behind where she should be with her speech. A lot of the time she would say things and only myself or Jordan would know what she was saying. Mainly because we spend a lot of our time with her so we got used to how she would say things. Even if they wernt the correct way of saying things. I noticed that she was getting a little lazy with her speech and we wernt helping things because we didn’t correct her when she wasn’t saying things properly.

So over the last few weeks we have been working hard to get her speech to were it should be. So I thought I would share with you some simple speech and language activities to promote language development in pre schoolers.

When Children start to talk they may have slang words or shorten versions of a word that they use . Ava has a lot of these in her vocabulary like cuddles is cuggles. Yes they may seem cute when they are little but as they grow older they really need to learn to say things correctly. So we have made a conscious effort to make sure that Ava is saying things correctly. Not only do we make sure she says them properly but that we say them properly. As we have also fallen into the trap of using her ways to say words which isnt helping.

Ava would frequently come up to me a put a car in my face and say look car. So now of just saying yes it is I Have started to expand the sentence. So for instance with the car comment I would say back to her Oh yes it is a car ! a big blue car. From just doing this one simple thing she is hearing more words which she can then use herself in her own conversations.

Encourage her to use her words

Ava can be a lazy talker at times and sometimes just makes a huh noise instead of actually talking. So I’m making sure she actually says pardon and use the words I know she has in her vocabulary. Instead of just making a sound and us responding to her. This is something I’m constantly having to remind her of but over time I can see her now thinking before she just makes a noise. Or she will go Huh then quickly go pardon afterwards

Children respond best to things that are fun and learning new words doesnt have to just be using boring flash cards it can be fun too. We sing songs all the time in our house and now I have started to play more music for her in the car. Like nursery rhymes or songs from her favourite film the greatest showman. I have found her listening to the songs and learning the words has really increased the amount of words she knows.

The best thing about using songs to learn new vocabulary is that children dont actually realise they are learning . They just think they are having fun singing songs. Just from singing Old Mc Donald has a farm a few time over the last few weeks. Ava now has a greater understanding of different animals and actually calls the animals by their name rather that the sounds they make.

Now this is something we haven’t really done in our house before. Not for the lack of books because we have loads. Just because Ava hasn’t really had the attention span to sit there and listen to a story. As part of Ava’s bedtime routine we would put on Ceebebies bedtime story before she went to sleep. I started to notice that she wasn’t actually watching them she was just using this time to mess around before bed. So I switched it up a bit and instead of watching a story we started to read her a story before bed.

In just a few nights she started to show a great enthuisam towards books. She was excited to pick a story out for us to read to her. Her favourite has to be were going on a bear hunt. This book is fantasic for children as it has a repetitive rhyme which allows the children to join in with the story.

With life being so busy it’s easy to go through the day and not actually have a conversation with your child. When I pick Ava up from nursery I would ask the staff what she had been up to instead of asking her. So now when I pick up I have the normal hand over from the staff. Then talk to her nearly all the way home asking her who she has played with, what they paid, if she has had a good day . Which she loves especially if she can tell me that someone has been told off but she has been a good girl.

I think this last one is the most important. To take time and actually talk to your children give them time to tell you all the things they want to say. Since we have being doing this and all the other things above Ava’s speech has come on so much. I would say I’m not that concerned about her now. If we carry on doing what we are doing and she carries on to progress like she is then before we know it we wont be able to stop her talking.

Also it shows above helping your children to develop doesnt have to cost anything. The speech and language activities above dont cost a thing but they have a huge impact on children.

What speech and language activities do you use with your children ? 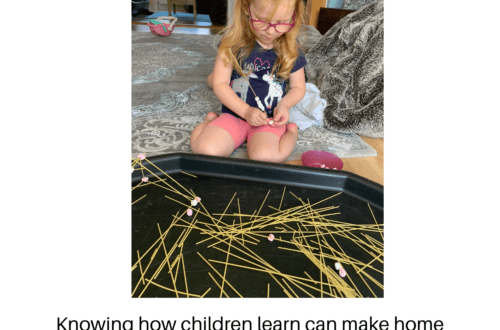 Knowing how children learn can make home schooling so much easier

January favourites- What I have been loving this month