Last week we took Ava swimming for the first time . We have been wanting to take her for a long time but for one reason or another we haven’t been able to. I was a little apprehensive about taking her swimming not because of Ava . Because it would be the first time since having children that I have worn a swimming costumes.

To make myself feel a little bit more confident about wearing a swimming costume. I brought myself a new one . One of those ones that sucks you in . Also I didn’t want to try to squeeze in one of my pre children costumes . As I know I would be comparing myself to how I used to look . The costume I got was only £10 from Asda and I felt happy in it. I wouldn’t say amazing but hopefully when I lose a bit more weight I will be more happy with my body.

As it was the first time Ava was going swimming Jordan came with us . We both wanted to share the experience with Ava . So this is why we also let Alby with nanny so all our attention was on her . For the first time since Alby has come along we had our undivided attention on her. Which was one of the things I was looking forward to. 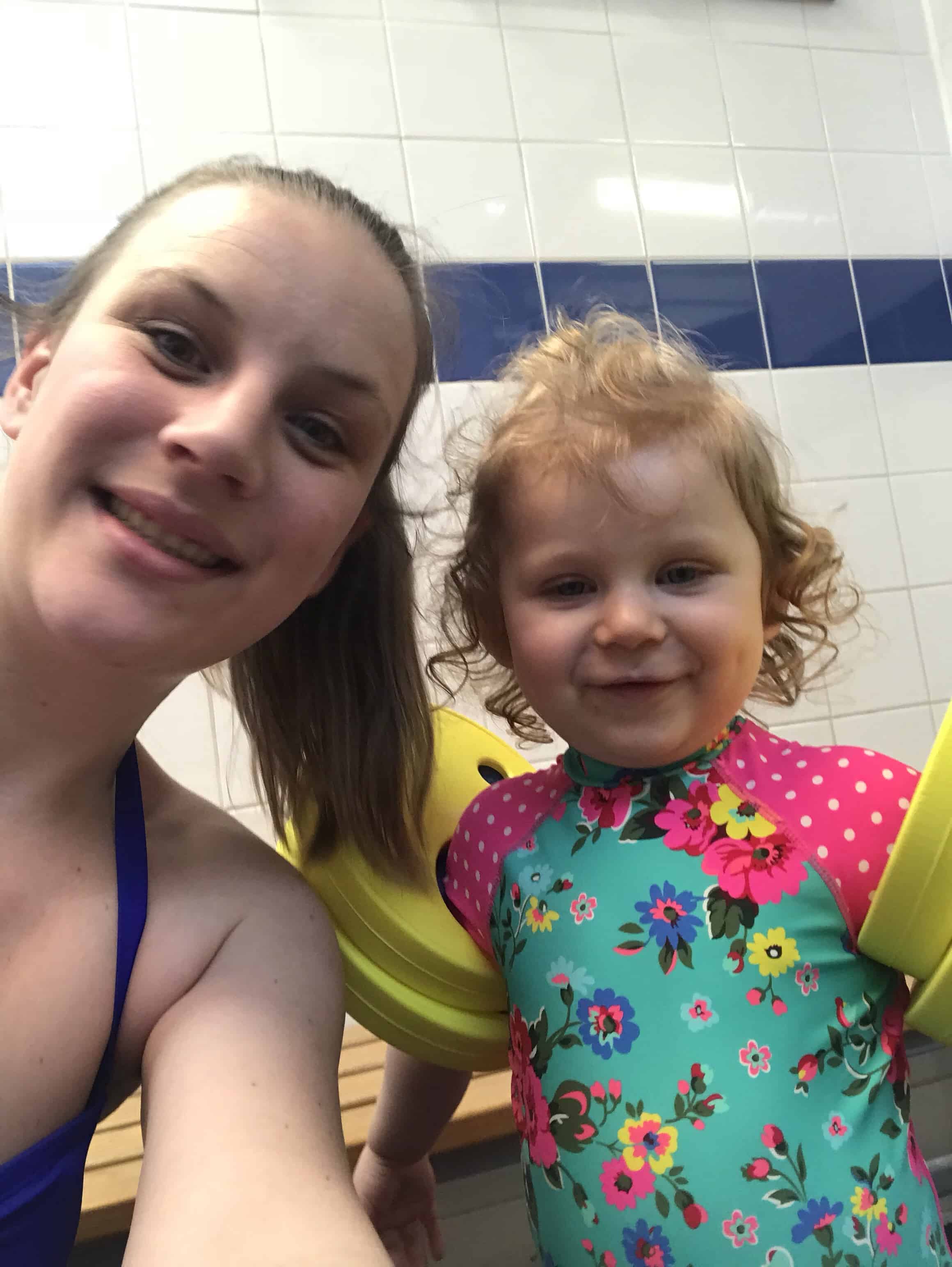 When looking for a place to take her swimming I wanted to make sure it was a toddler swim. I didn’t want her to be scared of any older kids in the pool splashing around. Especially as it was her first time in a swimming pool. Thankfully a leisure centre not far from our house has a toddler and parent swim on Thursday from 3.13-4.00 which is perfect. I did also call them before going to check what their rules were on armbands. To which they said they don’t supply any and if you wanted any you had to bring them yourself. I asked my Instagram follows on a story what they would recommend for armbands and a lot of people came back with the same opinion. That the plastic blow up ones that many of us had when we were younger are not that good. They either inflate too much or they can cut into their arms. Now I think about it I do remember having sore arm from blow up arm bands. So we opted for some foam disk armbands. They come in a pack of 4 from Amazon and when we brought them they were on offer for £13.88. Which I didn’t think was too bad.

The one thing I really liked about these arm bands is that. As your child gets more confident you can take one disk of each arm. So they still have a little bit of help floating.

Before we went swimming I made Ava have a little nap so I knew she would be in a good mood. I got her in all her swim stuff at home so she didn’t have to wait around once we had got their. Ava doesn’t really do waiting like most toddlers I guess. So I thought if we went all sorted to swim it would make it less stressful Which it did. 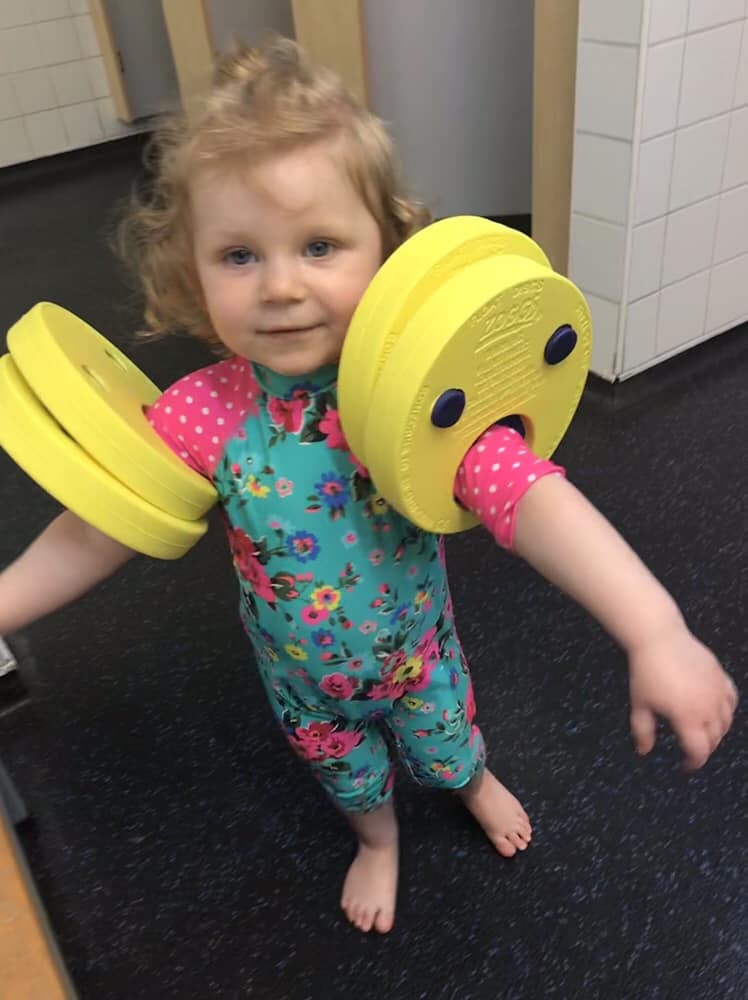 She was really excited when she saw the swimming pool. She got straight in no issues . She did hold onto me a lot but that’s fine as it must be so scary to start with. All was going well until her face went under the water. She then wanted to get on the side. Which we let her as we didn’t want it to be a bad experience. The girl who was doing life guarding duties was so good, she went and got Ava lots of different toys she could play with in the water. After some encouragement she got back in the water but wanted to sit on a float. She found great enjoyment in throwing the toys into the water from the float and making me and Jordan get them for her.

Once she was a little bit happier with being in the water Jordan started to pour some water on her head from a toy watering can. This was to get her used to the sensation of her head being wet. After a few minutes I decided that was it she needed to take the plunge ( not literally). So I got her a started to move around the water.

After not long at all she was getting more and more confident. She took very well to being on her back and kicking her feet. I think she mainly liked this because she could splash her daddy. She started to let go of me a bit more and even started to blow bubbles into the water. Which was something I remember teaching the kids when I used to be a swimming teacher. 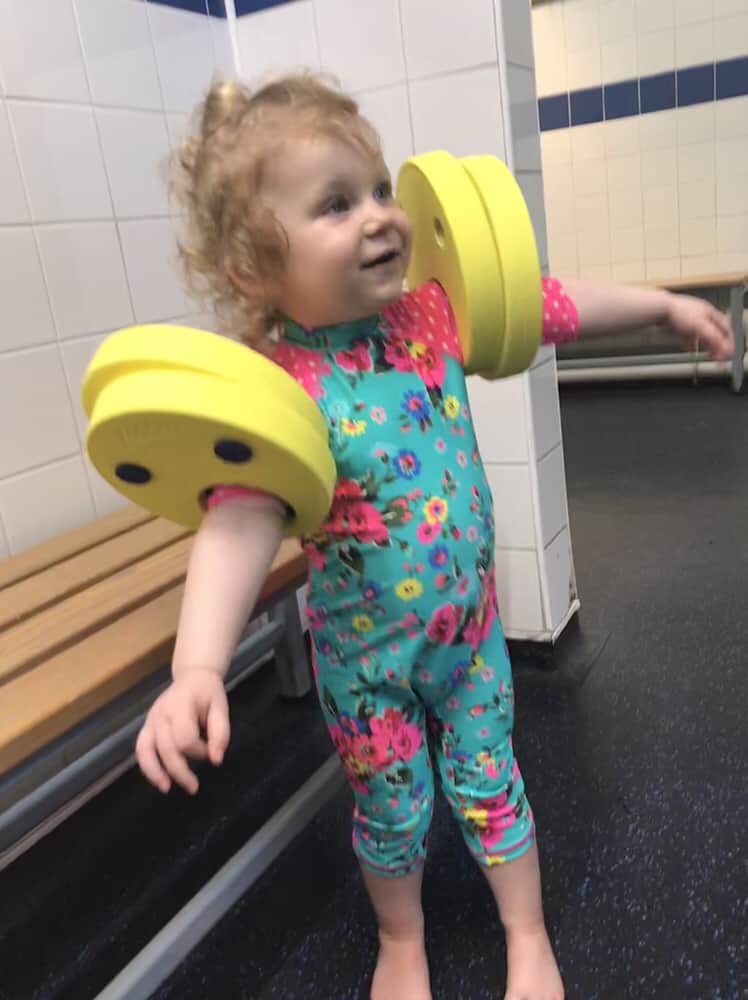 Before we knew it the session had come to an end. Qu the tantrum Ava had now decided that the water in fact was really fun and she didn’t want to leave. I took her screaming into the changing room took her arm bands off ready to pop her in the shower. She then made a run for it heading back towards the pool ! Luckily I was fast on my feet and got her before she got too close to the water.

Once I had got her in the shower she calmed down and started to splash about in the showers. Which have zero pressure and the water just trickles out of them. Which is just great when your trying to wash a toddlers hair .. Not ! She then paraded around the changing room naked whilst I got changed. I must remember next time that I need clothes which are easy to get on in a rush. I got all of a tangle in my top which really made me hot. Why swimming pool changing rooms have to be so hot I will never know.

Now we know Ava will like swimming were planning on taking her every week. Every other week I will have to do this alone as Jordan’s at work so we will see how that goes. I’m just glad of some exercise as I really don’t do a lot.

What swimming items would you say are essential to an easy stress free time ? 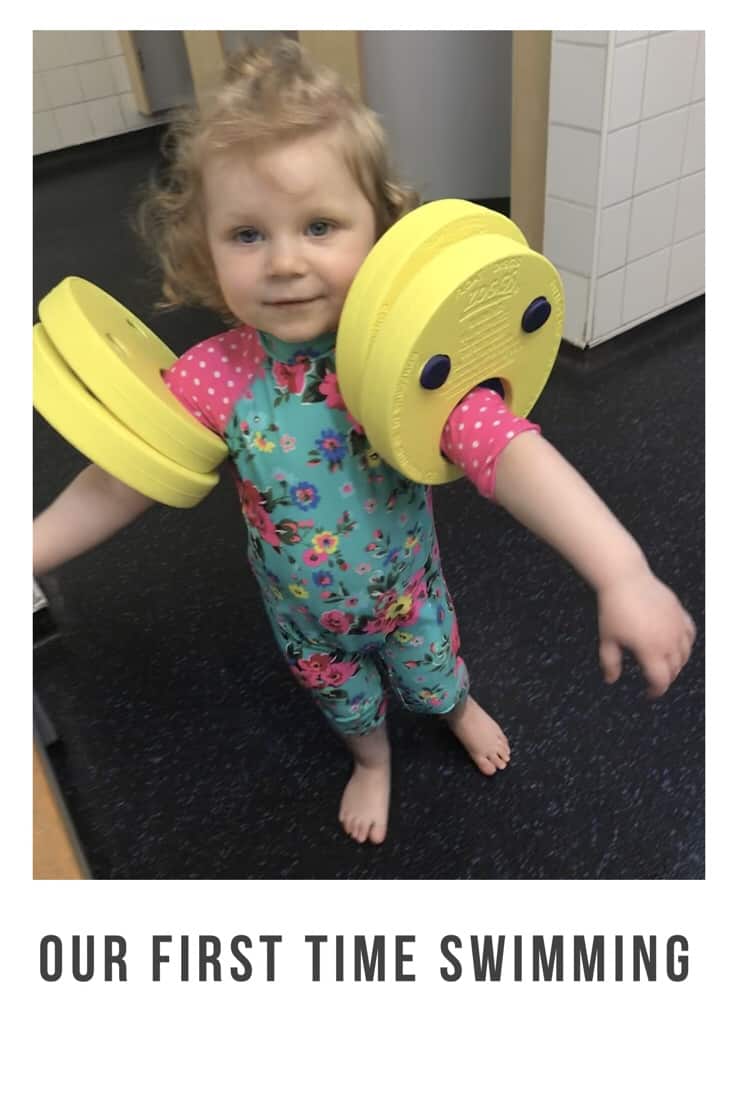