There are many things that toddlers learn and you think gosh that’s adorable . But most things make you think god I wish they would just be quite.

We are having at the moment no to everything even if she actually means yes . So in a morning I will give her the option of different breakfast items .To which she says no to every single one so I put them back. This then turns into the worlds biggest breakdown throwing herself on the floor , running away screaming . Then when she finally calms down she comes to the cupboard and picks exactly what I was trying to give her !! 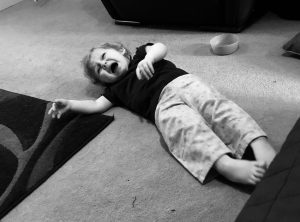 The annoying one at the moment is Ava is starting to show an interest in the potty so we’re trying to encourage this . Although she does love to be naked so she has realised that if she says she needs a poo I will take her nappy and trousers off . To which she finds it hilarious to run around the house half if not fully naked . Generally the only way to cloth her is to catch her and at 35 weeks pregnant this is easier said then done ! 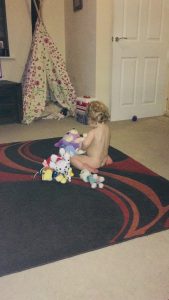 Walking the dog most days can be a pretty enjoyable task with Ava. We go as a family and she loves it but some days I’m sure a snail moves faster than her . I’m sure as well she does this on purpose as you can hear her chuckle as she does it . Speaking of chuckling she also sometimes does the whole laughing in your face whilst you’re trying to tell her off which is so annoying . One because it can make me wanna laugh and two because I know for a fact she’s not actually listening to me .

Isn’t it crazy also how children so young know who will let them get away with things . Whilst at my parents house the other day she wanted my phone I said no , she then went to my mom who said no. Then went to my dad with the biggest cutest smile on her face . Then guess what he gave her his phone to play with ! She knew she would get her own way with him.

Ava is becoming more and more of a fussy eater. Most of the time I don’t think it’s because she doesn’t like it but more because she cannot be bothered to try it . I can stand there making something she ate earlier in the week with no issues . Put the plate down in front of her and without even trying it she pushes it away saying ‘yack !’ . She then has this in her head and won’t eat any of it even though I know she likes it !

Ava’s also a big talker which is lovely . She is a right chatterbox and for her age I think she has a good range of vocabulary . However it can be really annoying when she repeatability says these words whilst in the car. Most days when we’re on the way the nursery I get ‘ car,car,ball,Peppa, wow, bird’ on repeat . Which with a half hour nursery journey can become quite draining . The thing is I try to join in with her conversation and she just shouts no at me !

I am sure toddlers are programmed to push your buttons and being pregnant and having a toddler to contend with is hard. I’m not going to lie sometimes I wish I could lock myself in a room away from her. Not all day just for 5 minutes and most days bedtime cannot come soon enough. It’s a good job I love her some days I’m telling you !

What things do your kids/toddlers do that drive you crazy ? 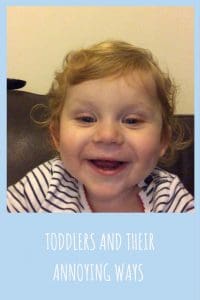 Why we decided to wean before 6 months 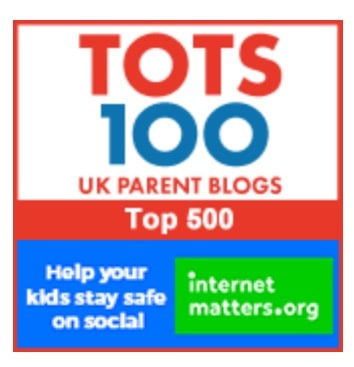