I’m back again with another Bostik blogger craft post . This months theme is space . Whenever I do activities with Ava I like to make sure it’s something she will enjoy and also something educational for her .

You may have seen that last week Ava went back to nursery . This time she has gone to a pre school which is completely different to the baby nursery she went to . She’s now at an age where she needs to learn thing like colours,shapes and numbers .

I have noticed over the past week taking her to nursery that she doesn’t say her own name . If I say her name she knows I’m talking to her but if someone was to say what’s your name she wouldn’t know . So I though I would incorporate this into this months craft post. 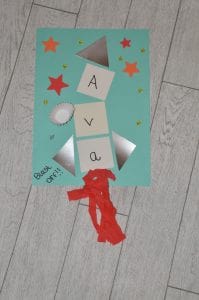 To make the Alphabet space rocket you will need

To start with you will need to cut shapes out of card these will then be made to create your rocket. How big or small your rocket is will depend upon how long your child names is . The main body of the rocket will have a letter on each section that makes up your child’s name.

To create the Alphabet space rocket we cut 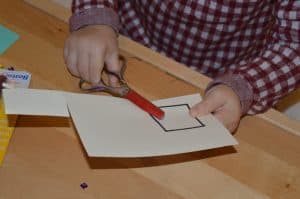 I then asked her to stick the squares with the letters onto some paper . As Ava doesn’t really know her letters I helped her with this . For older children they may just need some help putting them in the right order . Or you could write it on a bit of paper in front of them and ask them to copy the ordering of the letters. 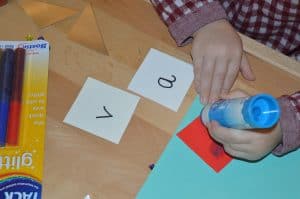 Next you will need to stick the triangles on . We put one on the top and then one either side near the bottom of our rocket. 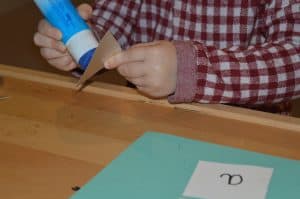 Ava then decided that we needed some fire coming out the rocket . So we did this by gluing some strips of tissue paper to the bottom of it. She then glued some stars around the Alphabet space rocket so it looked like it was blasting through the sky. 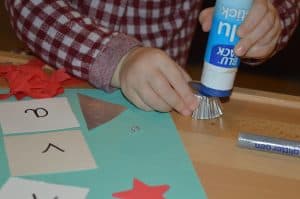 That’s it an Alphabet space rocket . It’s a really simple and easy activity to do with children but they can learn so much from doing it . Ava’s currently shouting A A Alligator at the top of her voice ! 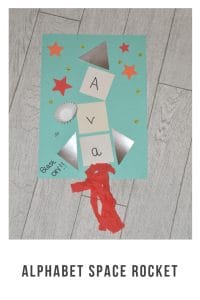 All about me activity ideas for the Early years foundation stage