The Fingerling craze is still going strong. With new additions to the fingerlings family including unicorns and sloths. We have been very lucky to be sent one of the two toned edition to review. Which as you can imagine went down very well with Ava. In fact I don’t think she has put it down since we received it. 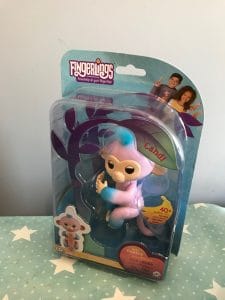 If you don’t know what Fingerlings are then where have you been? kids have been going crazy over these cute little creatures for some time now. A fingerling is a tiny tech creature that hangs on your finger. Each creature has cupped arms and legs forming a slot where your child’s fingers can fit inside. The Fingerlings monkey also has a curled tail which can also be used as another place your child can use to link their finger around. Ava does also like to make her monkey hang onto things mainly the poles on the Jumperoo. 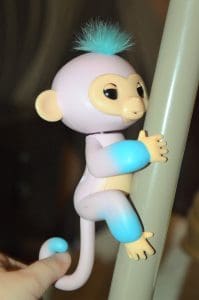 Fingerlings have more than 40 realistic monkey sounds ( even though Ava did think it sounded like a Duck). They also move every time they feel movement. Or even sometimes when they don’t feel movement. Ours has been known to go off by itself. Normally when Ava’s in bed and it creeps me out so it may be a good idea to turn it off when she goes to bed. It’s easy turned off by using the switch at the back of its head. I would say though it may not be a good idea to let your little one take it to bed like I did. As they too can turn it on really easily. No one wants to hear the noise of a Fingerling during the night. 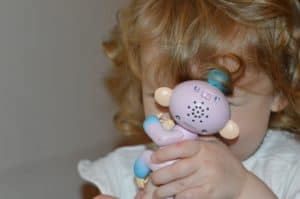 What else can a Fingerlings do?

Kids can blow kisses at their Fingerlings and it will kiss back. They can pet their it and it will interact back with them. Ava’s personal favourite is to make her monkey go to sleep. You do this by hanging them off your finger and rock them too and fro. Ava finds it so funny when her monkey starts to snore.

Fingerlings also have moving heads and blinking eye and a cute little tuft of soft hair on their head.

It does say on the box they are recommended for children ages 5+. Ava at two and a half loves hers. Like with all her toys I watch her when she plays with them. There are no small parts that come off and I have found she plays really well with it. She really enjoys the interaction with the Fingerlings and does know how it works. She is able to get it to interact with her just like a 5-year-old would. 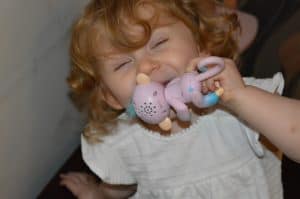 Overall I think this little Fingerlings called Candi is adorable. Ava loves it and when she has taken it out with her it has sparked conversations with lots of children. Which is great it seems like lots of children are still loving Fingerlings. I’m sure we will see lots of new designs over the coming months. Especially at £15 each I personally think that’s a great price for such a great toy. 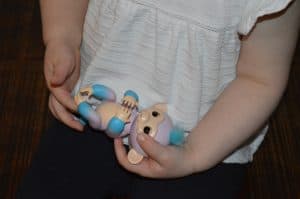 *We were sent the Fingerlings shown above for free in return for an honest review. All opinions are my own* 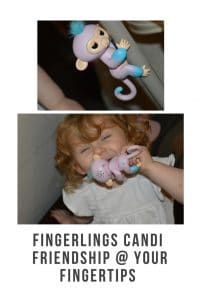 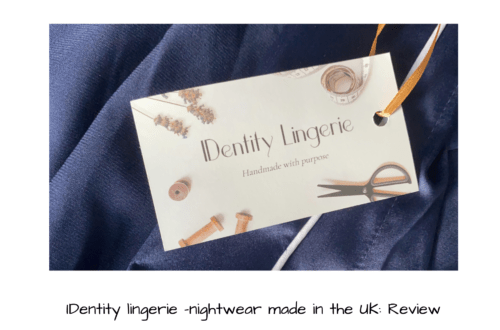 IDentity lingerie -nightwear made in the UK: Review

Keeping germs at bay thanks to Milton Antibacteiral products : review and giveaway